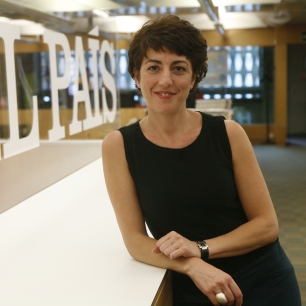 Rosalía Lloret is Head of Institutional Relations at the Online Publishers Association Europe and an independent adviser to several media and digital projects in Spain. Until June 2013, Rosalía worked as Chief Digital Officer at Prisa News, the publisher of El País, and was a member of its Executive Committee. She joined Prisa from Unidad Editorial, publisher of El Mundo newspaper, where she held the same position.

Before that, Rosalía was Director for Interactive Media at RTVE, Spain’s public broadcaster, and a member of its Executive Board. In this position, she was responsible for the creation of the new Interactive Media division, the launch of the award-winning internet site www.rtve.es and the design of RTVE’s digital strategy across all platforms.

Personally involved in the establishment and development of several pioneering Spanish websites, Rosalía was Head of Content in the original team that designed Terra.es (Telefónica) and co-founder of Ya.com (Orange), where she held the position of Chief Content and Services Officer and was member of the Executive Board (1999-2004). Prior to this, she worked as a consultant on the creation of the new internet platform for 20minutos.es newspaper.

Rosalía began her professional career at the business newspaper Cinco Días and the magazine Autopista.

She has a degree in Journalism (Universidad Complutense) and a Masters degrees in Global Politics (with Distinction, London School of Economics), Journalism (Escuela de El País) and International Relations (Instituto Ortega y Gasset).