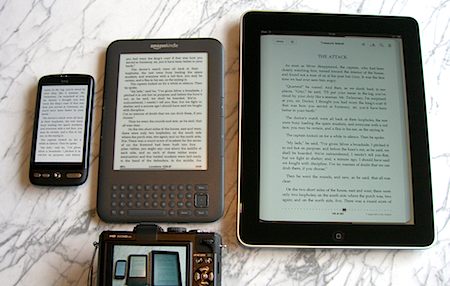 Some news groups are reselling investigative pieces on eBooks, on mobile phones and print on demand. Photo credit: by Edvvc, from Flickr, Some Rights Reserved

With revenues under pressure and resources short for most independent news organisations, there is a widespread fear that in-depth, investigative journalism will suffer.

However, news outlets, entrepreneurs and journalists are displaying dedication and creativity in developing new economic models to support investigative journalism. Different models are taking advantage of unique opportunities and addressing the specific challenges that exist in different markets around the world.

The digital-only news organisation has just capped its first five years with the resignation and arrest of the country’s budget minister, Jerome Cahuzac, due to one its investigations, and questions raised over the fundraising of former president, Nicolas Sarkozy. Cahuzac had earned the nickname of “Mr Tough” for his campaigns to cut government spending and fight tax evasion, but he was forced to resign after Mediapart uncovered secret offshore accounts. Cahuzac vehemently denied the accusations and filed two libel suits against Mediapart, but four months later, he finally admitted that for two decades he has hidden hundreds of thousands of Euros in an UBS account in Switzerland. Not long after, the site reported that Jean-Marie Le Pen, the former head of France’s far-right party, Front National, had also held a secret Swiss bank account. Le Pen admitted that the account existed but lashed out at Mediapart journalists, calling them “KGBists”, according to RFI. The investigations have put pressure on both the right and the left in France’s political establishment and helped challenge some of Mediapart’s critics who liken hard-hitting investigative journalism to vigilantism.

The site relies on subscriptions and it has 65,000 subscribers to support its 31 journalists and 14 other staff, according to an article in French newspaper Le Temps. The site carries no advertising and relies entirely on a €9 monthly subscription. Mediapart editor and co-founder Edwy Plenel described the site’s situation as successful but fragile, saying he would feel more comfortable with 100,000 subscribers. The success is even more notable as there is a relatively low level of interest in investigative journalism in France.

Mediapart’s success has inspired Spanish journalists to launch their own investigative news site, InfoLibre, and the two sites have created a partnership. Partnerships and syndication are another way that investigative news groups are working to achieve sustainability.

Investigative journalism organisations such as ProPublica and the Texas Tribune in the US have entered partnerships to help publish their investigative work. The Texas Tribune was launched in 2009 to help fill what its founders saw as a gap in investigative coverage of state politics. When the site launched, 90 percent of its funding came from foundations and major donors, but now that figure is down to 40 percent, according to the Columbia Journalism Review. In 2012, the non-profit news organisation, now with an editorial staff of 17 and 15 tech, business development and administrative staff, turned a small profit, earning money from memberships, events, corporate sponsorship and advertising. It also used some of its start-up funding to buy the Texas Weekly, a subscription-only online political newsletter, another source of revenue. It is now launching a niche newsletter focused on water issues called Flow, and this could be just the first of several email newsletters focused on niche policy areas.

The site has always worked to build its impact by partnering with 27 newspapers and 11 television stations across the state. It also has a successful, ongoing relationship with the New York Times to help the national newspaper provide coverage of Texas state politics.

Partnerships can also help editorial organisations develop entirely new content areas. Slovak news weekly Týždeň wanted to build on its reputation for high-quality visual journalism that it had established in print, and took its unique style and expanded it online as part of its paid content strategy. The site has also partnered with the Slovak national broadcaster to produce a weekly live discussion programme. Partnerships can both increase impact and provide revenue, and may lead to a virtuous circle.

A number of news organisations both in advanced and rapidly developing internet economies have been experimenting with packaging their longer (now frequently referred to as long-form) journalism in e-book formats – a relatively low-cost method of earning more revenue from existing content.

Amazon developed a specific format for shorter fiction and non-fiction pieces, including long newspaper or magazine articles, for its popular line of e-readers, called Kindle Singles. Several large magazines and news businesses such as The Atlantic, Vanity Fair and The Guardian, which launched Guardian Shorts, showcase their investigative journalism in this way. The Guardian launched the new effort with a Kindle Single version of its coverage of the recent phone-hacking scandal.

Long-form journalism on e-readers is also opening new opportunities for non-traditional publishers, such as the foundation-supported ProPublica investigative journalism group in the US. They have found success in selling their long investigations and it gave them a valuable outlet that didn’t rely on syndication via other news organisations or their website. Although a ProPublica piece on Pakistan and the Mumbai bombings was available free on its website, the piece, which sold for 99 US cents, reached number two in the top 10 Kindle Singles bestsellers, according to Harvard’s Nieman Lab.

News organisations pursuing this strategy have found that consumers often want the opportunity to subscribe to an investigative news service rather than buy individual pieces. While the opportunity to buy only the pieces they are interested in seems an appealing proposition for readers, news organisations such as the Toronto Star found that they sold only 100 to 300 downloads at CA$4.99. Sandy MacLeod, vice-president of consumer marketing at the Toronto Star, told Eric Mark Do of the Canadian Journalism Project that even to reachReach1) unique users that visited the site over the course of the reporting period,…//read more  that level, it took “an intense amount of marketing”. With such marketing overheads, it’s difficult to see how the project would generate meaningful revenue.

To address the issue, the Star decided to adopt a subscription-focused model. Now for CA$4.33 plus tax, readers are emailed a link to the most recent piece, and they have full access to the back catalogue of dispatches. Non-subscribers can still buy individual pieces for CA$2.99. MacLeod’s goal is to sign up 10,000 subscribers by the summer.

The trend of repackaging and selling long-form journalism in e-book format is not limited to advanced internet economies. In South Africa, long-form non-fiction publisher Mampoer Shorts launched last year. The project publishes 10,000- to 15,000-word pieces on most major digital platforms including iOS and Android, the Kindle and Kobo e-readers, PCs and Macs, as well as for print out. Authors earn 30 percent of the $2.99 price of the books, and for its 70 percent of the takings, Mampoer Shorts handles traditional and digital publishing roles, according to South African website, Books Live. The project, launched by well-known figures in South African media, hope to sell 5,000 downloads of each piece.

“Paywalls are going up everywhere – people are becoming accustomed to buying quality content online, and I absolutely believe that the only way to create quality journalism is to get people to pay for it,” publisher and academic Anton Harber said at a launch event.

However, it’s important not to think just of tablets and e-readers, which are often scarce in developing digital markets. Creative entrepreneurs are using mobile phones and mobile social networks such as Mxit to distribute fiction and non-fiction. The popular African social network distributed the first mBook in 2009, and it has since distributed novellas targeting its young audience.

It’s important to think about mobile platforms as potential distribution channels, especially with the rise of phablets – large screen smartphones that are as much tablets as phones. In many markets, consumers will forego having a computer or a tablet and buy large-screen smartphones such as the Samsung Galaxy Note.

While we often think of technology in digital terms, new technology has also revolutionised print media. You only have to think of the desktop publishing revolution that began in the 1980s to realise the changes digital technology has brought to print media. Mampoer Shorts are also distributed by South African print-on-demandOn-demandThe ability to request video, audio, or information to be sent to the screen…//read more  pioneers, Paperight. Rather than build out a network of print-on-demand facilities, Paperight leverages the almost ubiquitous copy shops in South Africa.

While South Africa has a number of digital readers, the company can reach even more people in print via the copy shops. At a conference earlier this year, Paperight founder and CEO Arthur Attwell described the digital divide in South Africa, in which he also saw an opportunity:

I come from Cape Town, South Africa, and my background’s in educational publishing and e-book production. South Africa is like two different countries: about 2 million wealthy people who support the publishing industry (excluding schools publishing, where the state is the largest client by far), and about 48 million people who could never afford an e-reader, don’t have credit cards to buy things online, or can’t afford to physically travel to a bookstore. So to make it possible for most people to read books, we need to totally rethink how we sell books.

Using the internet, computers and printers available in most South African copy shops, he saw an opportunity to sell text books, literature and even long-form journalism such as Mampoer Shorts to the millions of South Africans without e-readers.