Most media coverage of the ASDA’A Burson-Marsteller’s 5th annual Arab Youth Survey focused on the positive. This is perhaps not overly surprising, given that the publication’s title – “Our best days are ahead of us” – reflected a sentiment three-quarters of respondents agreed with.

For MENA’s media players however, the report made for a more sobering read.

Two-thirds of the MENA population is under the age of 30, so younger demographicsDemographicsCommon characteristics used for population or audience segmentation, such as…

Nonetheless, the findings of this survey suggest that traditional news outlets are losing the battle to retain the trust and interest of younger audiences. To reverse this trend news organisations will need to adapt and innovate. Failure to do so will see this young – tech savvy – consumer base continue to haemorrhage.

TV aside, old media in the Middle East is becoming less important as a news source for young people. The daily consumption of newspapers, radio and magazines by this age group has dropped by over 50 percent since 2011. Although almost half of young Arabs update themselves daily on news and current affairs, online and social media are the sources they increasingly turn to. 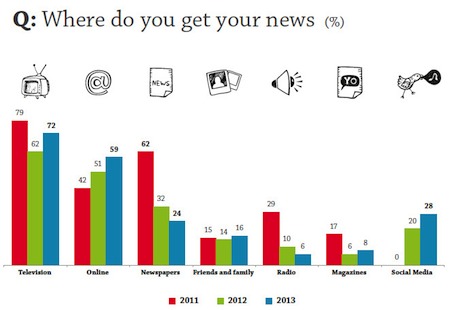 Despite TV remaining the primary source of news for Middle East youth, TV Executives cannot rest on their laurels.

When asked: “In your opinion what is the most trusted source of news?”, 48 percent of the survey’s 3,000 respondents selected websites (26 percent) or social media (22 percent), up from a combined figure of 27 percent just the year before.

Media consumption therefore should not always be taken as a proxy for audience trust or credibility.

For newspaper proprietors, their drop in the trust league table was even more pronounced, part of a wider shift away from this medium, and a migration amongst Arab Youth towards a preference for social channels. Coupled with declining consumption, ASDA’A Burson-Marsteller CEO Sunil John described this as “an alarming development for newspaper publishers.”

The digital opportunity: you have to be in it, to win it

With 81 percent of Arab Youth online every day (one source reported that 40 percent are online for at least five hours a day), the lesson to media players is clear; you have to be as active online as the audience you are chasing.

This is especially true given the decline in offline news consumption. Research from Booz and Co and Google recently noted that:

The same report also observed that 78 percent of the Arab Digital Generation prefers the Internet to TV.

As Jaber Al Harami,  editor-in-chief of the Qatari newspaper Al Sharq, has argued:

“This generation is the keyboard generation. 140 characters is all you need – media should be restructured.”

Many of the socioeconomic preoccupations of Arab Youth – rising living costs, unemployment and the challenge of home ownership – are the same as those shared by young people across the globe. Whether the Arab media adequately addresses or reflects these concerns is a moot point. If young people feel they do not, then this may contribute to the drift away from traditional news outlets.

The popularity of blogs – which are read by  48 per cent of Arab Youth and posted on by 38 per cent of them – offer a hint that perhaps mainstream media is not providing the range of content,  or opportunities for interaction, which many young people want to see.

Fashion, news and current affairs, celebrity news and technology, are the most popular genres for blog readers. Publishers need to ask themselves if they’re offering enough of this type of content. 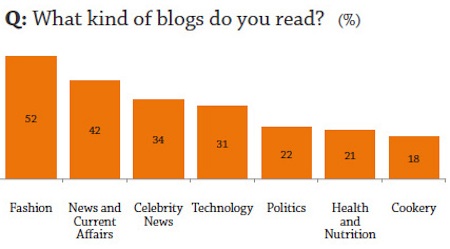 YouTube enjoys 167 million playbacks a day in the region, so media players also need to consider the importance of video online. Vice Media’s  documentary on a heavy metal band in Iraq – and their live streaming from Turkey’s Taksim Square – suggest this may be one way to reconnect with youth audiences.

The increasingly influential role of social media as a primary – and trusted – source of news also poses some interesting questions for news groups. (As shown in the chart above, social media easily surpassed newspapers, radio and magazines in both the survey’s consumption and trust categories.)

Given the dynamics of these networks, media companies will need to actively engage with fellow users and produce content tailored for these medium. With 64 percent of all Arab youth saying they have a Facebook account and nearly half saying they respond to tweets from others, one way of doing this is to create bite-sized content which is perfect for social sharing. That may include blog posts, video clips, infographics, tweets or pictures, all designed for the digital space.

Finally, it is important to note that whilst the Arab Youth Survey shows trends across the MENA region, the 15 countries featured in the study are not homogenous. They do share common characteristics, not least a renewed pride in their Arab identity, but there will be variations across national markets. (Perhaps the most pronounced of these is that 92 percent of Algerians say they regularly read blogs, compared  to 24 percent in Bahrain.)

Reports like the Arab Youth Survey offer great insights, but news groups will also benefit from digging deeper into the needs and behaviours of their audiences, so that they can tailor their efforts accordingly.

More insights are available from the study’s dedicated website: www.arabyouthsurvey.com