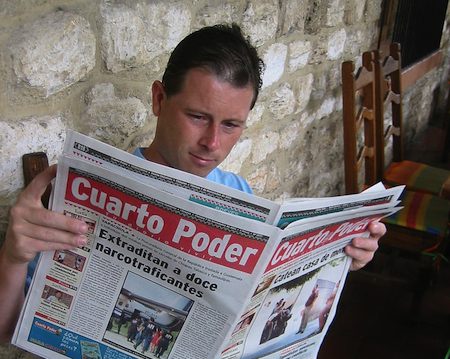 Defying the print media crisis in many parts of the world, Latin American newspapers and magazines continue to enjoy rising circulation and advertising revenue due to growing middle classes and economies left largely unscathed by the financial crisis.

However, internet use is growing rapidly in Latin America, and traditional media groups are exploring digital paid content strategies to try to protect and consolidate their dominant position, especially in the face of competition from new digital-only news organisations.

For instance, the Brazilian newspaper Folha continues to enjoy sustained growth in print circulation while also developing a dominant market position online, and it has become the poster child for paywalls in Latin America with the launch of a metered paywallMetered PaywallThe metered paywall allows users to view a specific number of articles before…//read more  strategy in January 2012.

While metered paywalls, in which users are able to access a certain number of articles before having to pay, are one of the most popular strategies globally, it is just one approach in use in Latin America, a reflection of the diversity in media markets across the region.

This success has given important legitimacy to paid content strategies globally. But for Latin American news groups, the economic imperative to develop paid content strategies is less, as performance in their print business remains strong. As in other regions, digital media market conditions vary widely in Central and South America, and there is no one-size-fits-all paid content model.

In our last look at paid content strategies, we highlighted the wide range of models in use as news organisations move beyond the binary debate of paid versus free and experiment with a wide mix of models. To recap, the major approaches include:

Market conditions help guide the choice of the most appropriate paid content strategy, and with the diversity of markets across Latin America, media companies have implemented a number of different approaches.

All access bundle and metered paywall – Folha (Sao Paulo, Brazil) – Folha was the first newspaper to implement a metered paywall in Brazil in January, 2012. They initially charged only for their tablet and mobile phone apps, but in in June of that same year they included their website.

Folha gained 45,000 new digital subscribers during their first year. Since then, many other newspapers have either followed suit or are studying how to implement a similar strategy.

When Folha launched their paywall, the rules were that each visitorVisitorIndividual or browser which accesses a Web site within a specific time period.//read more  would have 20 free articles per month while the homepage, cultural schedule and a site for children remained free. After reaching the 20 article limit, readers would have to register some information, then they would have an additional 20 articles before they had to pay.

In March 2013, the limit was lowered by half to 10 free and an additional 10 after registering. The ability to change the number of free articles is seen as a strength by proponents of the metered strategy. Unlike the New York Times model, which does not count pages accessed via links from social media towards the monthly limit, Folha does not make this distinction.

According to Roberto Dias, Digital Content Director, Folha’s website has 21 million unique visitorsUnique VisitorsUnique individual or browser which has accessed a site or application and has…//read more  per month, with over 270 million pageviews. “Today, every article by Folha is read by a lot more people than 30 years ago. What we really need to do is to look for sustainable models for the journalistic production process, which is expensive.  I think every newspaper is going to find their own; we are looking for ours as well.”

Hard paywall – Reforma (Mexico) – Since 2002, the Grupo Reforma have had a paywall on their websites and charged online subscribers 20% less than a paper subscription.

This was a means of protecting the print business, according to Jorge Meléndez, vice president of new media in an interview with the Knight Center.

After nine years, Reforma has 50,000 online subscribers and its daily circulation reaches 300,000. Currently, they have 5,555 new users per year. However, when they started the paywall, traffic shrunk by 30% and it took one whole year for it to return to its original level.

They currently offer a digital-only subscription that is good for up to four devices and a paper subscription that includes access for up to six devices. Offering bundles that encourage readers to continue to receive the newspaper is common, especially because print advertising still commands a dramatic premium over digital ads.

Digital kiosks – This model, similar to Apple’s Newsstand,  is particularly prominent in Spain, where Orbyt, Vocento and Kiosko y Más are some of the market leaders. In most cases, these kiosks provide access to a PDF version of the publication (similar to the one in print) and people can buy one or more publication from the kiosk at a price that is on average 50% of cover price.

In Latin America, kiosks are a fairly new concept, though one that is being developed.  One of the first to operate in the region is a Colombian kiosk for magazines called Pasalapagina.com; they offer access to 30 Colombian magazines for a monthly subscription fee.  According to a market survey, the amount people are willing to pay at the kiosk in Latin America is about 50% of cover price.

Platform specific strategies in Colombian media –  Semana, a political magazine, is the only Colombian media outlet ever to charge for the content they offer to tablet users.  Initially, the magazine launched a free app that reached over 110,000 users. They then introduced a fee charging for the digital subscription.

El Tiempo and El Colombiano, two of the leading dailies, are also working on paywall projects that they hope to implement in 2014.  Currently, these newspapers have free access to their digital editions and rely on online advertising for revenue.  However, they also offer a product called e-paper (an electronic version of the newspaper) for a discounted price.

In March 2012, El Colombiano, located in Medellin, implemented in its tablet edition a ‘freemium’ model which, after registering, allows the user to download the newspaper in its PDF version and have access to other publications such as smaller neighborhood newspapers and magazines. During the first month they attracted 7,000 users.

When developing a paid content strategy, publishers and media executives will need to consider the specific conditions in their market to determine whether a paid approach is appropriate and, if so, which strategy to choose.

Determining the market opportunity is key, and it is important to consider the unique market conditions in your country, both in terms of digital consumer adoption and digital market development.

The vast differences across Latin America help explain the wide range of paid content models being used. The overall level of internet penetration is currently at 42 percent in Latin America, but that only tells half of the story. Internet use varies widely, ranging from 66 percent in Argentina and 58 percent in Chile to 16 percent in Honduras and Guatemala, and 14 percent in Nicaragua.

Paid content systems involve costs in terms of development and infrastructure, and if internet penetration is too low, it might be difficult to generate meaningful revenue. There is also the issue that many Latin American consumers are not yet comfortable with sharing credit information online. However, it’s important to note the rapidly changing market. The online population of Latin America grew faster than any other global region in 2011, rising 16 percent to 129 m visitors in December 2011, according to The 2012 Latin America Digital Future in Focus report by comScore.

As internet use continues to grow in the region, the digital market opportunity both in terms of paid content and ad-supported strategies will increase for news organisations, but so too will new digital competition.

Mobile segmentation strategies in which users pay for the convenience of accessing content on mobile devices such as smartphones and tablets, while being able to read it for free on laptop and desktop computers, face challenges in Latin America. Tablet use is lower and growth has been slower due to pricing, limiting the immediate opportunity to use tablets as part of a platform segmentation strategy. According to market research company GFK, it is estimated that in Chile there will be 400,000 tablets by the end of 2013, for about a 2 percent market penetration.  In Colombia, 7.4% of the population owns a tablet, but tablets rank first when it comes to desired possessions. In the poll, 20 percent of Colombians indicated they wished to have one, according to an IPSOS-Napoleón Franco poll.

Other challenges exist including limited bandwidthBandwidthThe transmission rate of a communications line or system, expressed as kilobits…//read more  and the broad prepaid user base. In countries such as Guatemala, 94 percent of mobile phone accounts are prepaid, and even in  Brazil, 80 percent of subscribers use prepaid accounts, according to the GSMA, a mobile phone trade group. Prepaid subscribers tend to be more price sensitive

All of these factors need to be considered when building a paid content strategy around mobile phones.

The diverse market conditions make the challenge facing the industry a complex one.  On one hand, there are the opportunities presented by the increase of the potential audience both for the print edition and its digital counterparts. On the other, there is the risk of squandering them by cannibalizing their own print product. A premature move towards full digitalization at this time may sentence healthy print editions to an untimely death, but failing to develop digital products and revenue streams may cede future digital opportunities to new competitors.

The Colombian experience in this regard is interesting: fast-growing all-digital outlets such as La Silla Vacía and Kién & Ké are gaining ground on their traditional media counterparts, particularly in the younger demographic.

Most current strategies focus on differentiating the various digital products – online, on tablets and on smartphones – in order to serve the needs of the audience, while keeping an eye on the fierce competition from other digital-only media outlets. These digital competitors are probably betting on a faster rate of decline for the traditional model, especially as Latin America moves closer towards its development goals.

Many experts agree that traditional print products in Latin America still have a bright future ahead of them. In order to navigate the complex set of strategic choices across the markets of the region, newspapers and magazines have developed or need to develop tracking features to better understand their users and the ways they are consuming information.

For example, a newspaper might be interested in knowing their audience breakdown based on users in cities versus smaller towns, or what percentage of readers are coming from abroad.  Not all users are the same and not all of them are willing to pay the same; similarly, advertisers might favour a certain category of users or a certain pattern of online behaviour.

The next step for traditional media in Latin America is to figure out what kind of digital strategy is best suited for their particular publication. Technology will provide many of the tools to make this assessment and come up with creative ways to court the audience and develop digital products with a range of revenue streams.

The amount of information available and the level of depth of niche-specific content are also important factors when considering a paid content strategy.  For instance, sports content in Latin America is a type for which users have been more willing to pay; on the other hand, music and entertainment news content is rarely purchased.

In the end, innovation and creativity are a must when it comes to designing the models that will govern the region’s paid content strategies.  The question is, in the interim, while traditional newspapers still enjoy healthy circulation and advertising revenues, will they invest in integrating newsrooms and developing radically different models to stay ahead of the digital game, or will their current success lock them in a potentially obsolete way of doing business?