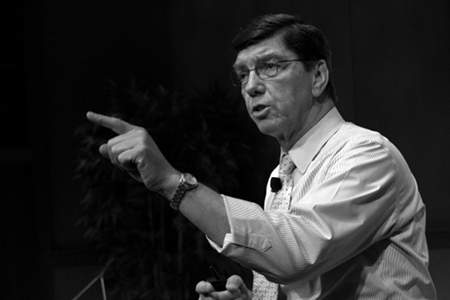 With the industrial and now information revolutions, technology has given rise to new competitors that challenge existing companies whose position once seemed unassailable. Titans of industry are laid low by what they initially view as low-quality upstarts. Kodak created the mass market photography industry but is now mired in bankruptcy and exiting the film business, toppled by a shift to digital that it saw but couldn’t adapt to. Its film business made it rich, but as digital photography and then camera phones disrupted its model, it couldn’t transition from the business that made its name. It was killed by its cash cow.

In North America and Western Europe, newspapers and news magazines face much the same challenge. You only have to look at US news magazine Newsweek ending its print edition after 80 years to see the pressure that they are under. They are facing what Clayton Christensen refers to as disruptive competition, which Josh Benton at Harvard’s Nieman Journalism Lab described as ” when technology enables new players to compete with incumbents on terms the incumbent isn’t used to”. Christensen outlined his theories in the book The Innovator’s Dilemma, which has inspired business leaders including Intel’s former CEO Andy Grove, New York Mayor and publishing icon Michael Bloomberg and the late Apple co-founder Steve Jobs.

Christensen, working with Canadian journalist David Skok and Forum for Growth and Innovation Fellow James Allworth, applied his theories on disruptive innovation to the news industry. They have summarised the results of five months of research and analysis in the autumn 2012 edition of Nieman Reports. It is worth reading the report in full (which is also available as an e-book), Skok’s introduction and an interview with the trio at the Nieman Journalism Lab.

Here at the Knowledge Bridge, we are focused on helping news organisations make the digital transition, and Christensen provides a framework for meeting the challenges of this transition.

In all of the cases that Christensen analyses, new competitors not burdened by legacy costs start by producing low-end products but then are able to move up the value chain.

Because new-market disruptors like The Huffington Post and BuzzFeed initially attract those who aren’t traditional consumers of a daily newspaper or evening newscast, incumbent organizations feel little pain or threat. The incumbents stay the course on content, competing along the traditional definition of “quality.” Once established at the market’s low end, the disruptors—by producing low-cost, personalized and, increasingly, original content—move into the space previously held by the incumbents.

This isn’t the first time that Christensen’s ideas have been applied to journalism. He was involved in the Newspaper Next project – which analysed the challenges facing the industry and attempted to identify possible solutions – some six years ago. Obviously, it didn’t have the transformative effect that many who took part had hoped. When asked by Benton at Nieman Lab about how the market had evolved in the last six years, Christensen said that their predictions were right but they underestimated the speed of the disruption.

I think the reason why this happens is that, even as the disruption is getting more and more steam in the marketplace, the core business persists, and really quite profitable for a very long time. Then, when the disruption gets good enough to address the needs of your customers, very quickly, all of a sudden, you go off the cliff.

What job does your audience want to do?

To meet this challenge, Christensen says that journalists, editors and publishers need to “always consider the audience first” and think of them not in demographicsDemographicsCommon characteristics used for population or audience segmentation, such as…

Putting this in terms of journalism, he gave the example of the Metro, a freesheet distributed to commuters in 70 countries. Metro may not be high-end journalism, but it helps commuters get information and fill their time as they travel to work. The entire paper, news and ads, is designed to be consumed in 20 minutes, the average commute. “By targeting the job-to-be-done, Metro has dramatically bucked the trend of declining circulation.”

To develop products that meet the needs of your audiences going through the digital transition, Christensen says managers need to ask the following questions:

The jobs that audiences want to do remain remarkably consistent, but the products that help them do these jobs change. In the past, people waiting in line at a shop or for a bus might read a newspaper, but now they often read updates on Twitter or Facebook or read headlines on their mobile phone.

Organising to meet the challenge of change

News organisations are not only facing competition from new, lean content providers, but also face competition from new competitors for advertising revenue whether that is search engines, social networks, daily deals companies like GroupOn and online classifieds sites.

Christensen framed the innovator’s dilemma for news organisations like this:

Four years after the 2008 financial crisis, traditional news organizations continue to see their newsrooms shrink or close. Those that survive remain mired in the innovator’s dilemma: A false choice between today’s revenues and tomorrow’s digital promise.

Just like Kodak’s film business, newspapers, radio and television stations continue to get the majority of their revenue from their traditional business, not their new digital businesses. In the early stages of the digital transition in media, the opportunity for and the threat to the incumbents seem small.

However, digital disruption can happen quite quickly once it gains pace. As Christensen noted, once the disruptive competitors get good enough to meet the needs of your customers “very quickly, all of a sudden, you go off a cliff”. From 2000 to 2012, print newspaper advertising inflation-adjusted revenue in the US dropped from $60 bn to $20 bn.

What is the best way to respond?

create a separate business focused on taking advantage of the disruption — and give it permission to outcompete and outperform its parent, even to run it out of business. Disrupt yourself before someone else disrupts you.

Josh Benton, the director of the Nieman Journalism Lab at Harvard, pointed out that many news organisations that once had a digital division separate from the traditional media business have since merged them as the economic pressure of digital disruption increased. One of the report’s researchers and authors, James Allworth, said:

Right. If you can’t afford to have two structures, taking the web structure and folding that back into the traditional business unit, which has got a cost structure designed to run in a completely different world — that’s not the way to solve the problem. The way to solve the problem is to create a new disruptive business unit that’s got to work out how to become profitable by itself. … Don’t assume your starting point is the existing organization, and you try and cut, cut, cut, cut, cut until you make it down to a new organization.

Christensen’s work and this report provide a framework for understanding, but that doesn’t guarantee success. Skok sees half of the challenge is changing the culture of news organisations. He says:

I have come to the realization that while the technological disruptions facing our industry are 50 percent of the challenge; the other 50 percent is on us. We have failed to foster a newsroom culture that rewards innovation and empowers the younger generation, that can readily adapt to the new media world around us, and that is willing to experiment with the diversified revenue streams right in front of us. To use the oft-quoted phrase, “culture eats strategy for breakfast.” Our traditional newsroom culture taken in aggregate has blinded us from moving beyond our walls of editorial independence to recognize that without sales and marketing, strategy, leadership and, first and foremost, revenues, there is no editorial independence left to root for.