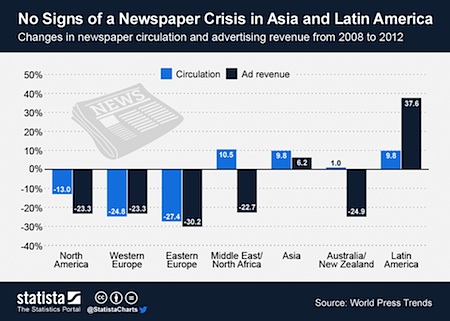 In the past five years, print circulation and advertising continued to grow in Asia and Latin America while falling dramatically in most other parts of the world, with Eastern Europe suffering most, according to the 2013 World Press Trends report by WAN-IFRA.

In some ways, little has changed in the past year. Newspapers, both in print and in digital form, continue to enjoy unprecedented readership, with more than half of the world’s adult population reading content from newspapers. However, with advertising revenue declining over the last five years by 23.3 percent in North America and Western Europe, by 24.9 percent in Australia and New Zealand and by a dramatic 30.2 percent in Eastern Europe, the industry is still under pressure.

As with last year’s report, WAN-IFRA found that engagement remains a challenge. However, the study has found some rays of hope and successful strategies that are beginning to show promise in generating revenues both from digital circulation and also from new non-traditional revenue sources.

Newspapers continue to enjoy large audiences digitally. However, while newspapers find that digital platforms have increased their readership, the engagement they enjoy is low compared to internet giants such as Google and Facebook.

While more than half of the digital population visit newspaper websites, newspapers are a small part of total internet consumption, representing only 7 per cent of visits, only 1.3 per cent of time spent, and only 0.9 per cent of total pages visited.

To put this in perspective, Nielsen in the US found in 2010 that internet users were spending 40 times more time on Facebook than any news site. They spent 8 to 12 minutes a month on local newspaper websites, but they spent on average seven hours a month on Facebook.

While the challenges have changed little in the past year, newspapers are finding ways to generate revenue to offset the declines in advertising.

Develop paid content strategies – With the success of the New York Times in implementing their paid content strategy, the report said that almost half of the newspapers in the United States have rolled out paid content plans of their own. The strategies vary. “Forty per cent are using a metered model, one-third charge for premium content, 17 per cent require payment for any access, and 10 per cent use some other model.”

Subscriptions are performing better than single copy sales, and the report also found that “The packaging of print/digital subscriptions is becoming increasingly successful.”

News organisations around the world are trying this bundling strategy, including Folha in Brazil, and the newspaper has signed up 45,000 digital subscribers in the first year of operation of their paid content strategy.

In our overview of Latin American paid content strategies in April, we found a number of different approaches including metered and hard paywalls, bundled print and digital subscriptions, digital kiosks similar to Apple’s Newsstand service and also platform based options in which publications charged for access to tablet editions.

There are some very positive signs about the resilience of the industry, but a lot of that lost revenue won’t necessarily come back.

Look to tablets to match print engagement – Audiences are increasingly turning to mobile, and while advertising revenue on mobile lags, research found “news engagement via tablet, as measured by time spentTime SpentThe amount of elapsed time from the initiation of a visit to the last audience…//read more  with news content, is equal to that of the printed newspaper”. With higher levels of engagement, there is the promise that advertising revenue could be higher on tablets than on the web.

In the United States, 27 per cent of newspaper company revenues now come from non-traditional sources: 11 per cent from digital, 8 per cent from new revenue from other sources (service to clients in addition to advertising), and 8 per cent from non-publishing revenue (e-commerce).

Developing these services before traditional revenue streams start to drop may provide insulation from digital shocks. What new revenue streams are you pursuing? Have some proven more successful than others? Let us know in the comments.

Leverage print dominance to fuel the digital transition – All but a handful of newspapers in North America and western Europe failed to leverage the powerful position they had in print to ensure their digital, multi-platform future. But according to Frédéric Filloux, the general manager of for digital operations at Les Echos Groupe in France, news groups in Latin America and Asia are succeeding where their developed counterparts failed. Writing on his popular blog, Monday Note, Filloux said:

At a much faster pace than in the West, Latin America and Asia publishers take advantage of their relatively healthy print business to accelerate the online transition. These many simultaneous changes involve spectacular newsroom transformations where the notion of publication gives way to massive information factories equally producing print, web and mobile content. In these new structures, journalists, multimedia producers, developers (a Costa-Rican daily has one computer wizard for five journalists…) are blended together.