Getting started with online video: Experiences from the Slovak market

Predictions about how new technologies will develop in the future are like horoscopes. If you want to get it right, you need to be as general as possible and hope that no one will notice that the few details you did include you got wrong.

Online video is a good example of this. Predictions from 10 years ago were made up of points that were so general that there was no way they wouldn’t be right.

Like the claim that video will become more and more popular. Of course it has. 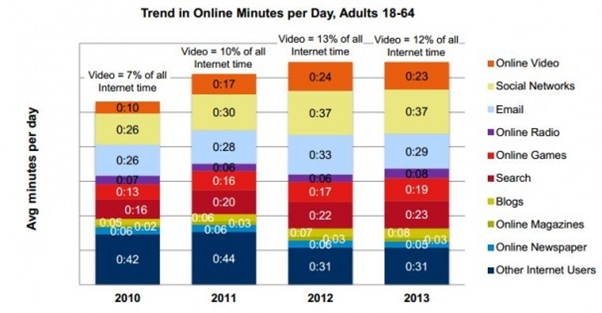 Or another similarly vague prediction that online video will transfer from computers to other platforms.

Also true. What else?

And, fortunately, predictions that advertiser spending on online video will also grow – at least that’s becoming true in the American market. 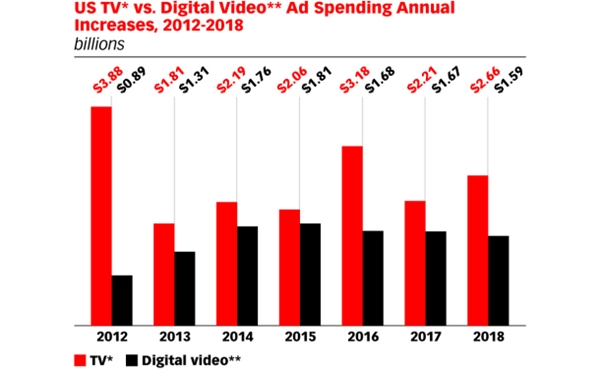 When the predictions, however, got a little more concrete, they usually failed. The one that stands out the most is probably the idea about what type of video a viewer will want to watch in 2015.

According to the fortune-tellers, the attributes of a popular online video should be:

Around 2010 it looked like this forecast might come true. YouTube was at that time full of cat videos with millions of views and short-form online video was the subject of such a buzz that every marketing conference included viral video presentations in its program.

Except that long-term enchantment with short amateur videos couldn’t last and because television viewer habits were eventually transferred to other devices.

Even though cat videos are still popular today, many users actually seek videos longer than 10 minutes. This is true on all devices, including smartphones where it seems the limits of mobile internet do not play a major role.

This was changed with the success of video-on-demand services such as Netflix and Hulu, which started to pour $100 million budgets into original content.

Professionalization of online video was also helped by a partner program and YouTube grants, as well as the related development of MCN services such as Vevo, Fullscreen or Machinima. 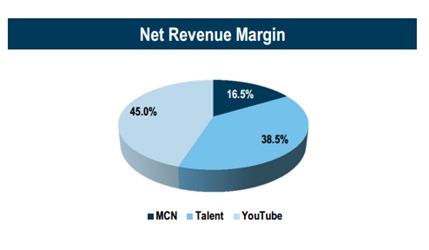 So, what should you do?

While in the past, media houses could have dreamed about using short videos generated by users (ideally with production costs nearing zero) as being enough for their video content, today, it seems clear that if you want to be successful in this field, you need the exact opposite. That is, you need content which is:

For a publishing house, it means only one thing: though a publisher doesn’t need the budget of a television station to launch online video, it needs to accept that online video will be one of the most expensive online formats.

So, as the UGCUGC (User-Generated Content)Content created by the public at large, generally not professionally edited,…

The golden middle path is exactly what the TV SME project, an online television ran by Slovak daily Sme.sk, attempted to find. 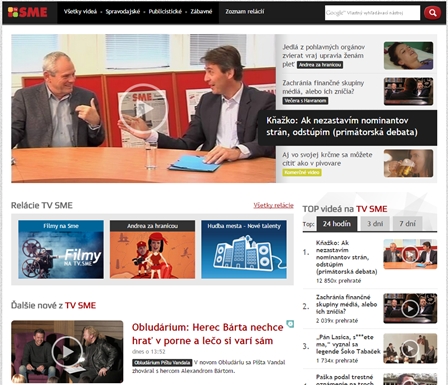 Since 2007, TV SME has produced around 30,000 videos and more than 1,000 regular programs for which the production costs ran in the order of hundreds of Euro (or lower) for each episode.

Creating video content is not a necessity – news portals and magazines can survive without it. If, however, you decide to give it a try, here are the 5 most important lessons from the TV SME experience:

Although online video formats should be as professional as possible, in the beginning it’s essential to focus more on the content being professional, rather than the production.

Can a professional news portalPortalA Web site that often serves as a starting point for a Web user’s session. It…

In both cases: yes, it can. TV SME did both of these when it started and it didn’t seem to hurt its image. On the contrary, one of the most successful TV SME videos from 2010 (over 130,000 videos made) was a recording of the daily SME’s editor interviewing the President of the Slovak Parliament, who couldn’t stop laughing at the fact that one female nationalist member of the parliament slapped another.

The editor filmed the video on a Nokia N95 mobile, which TV SME provided to some of the daily’s editors when we launched the channel.

An amateur-looking video isn’t a hindrance if it’s balanced by interesting, intelligent content. If you have amateur and insipid content, troubling yourself with form is basically pointless. It’s a cliché, but content is king and form is secondary.

However, if you want viewers to pay attention to what you’ve filmed, decent audio is crucial. If the video is shaky and low resolution, the viewer will survive. If, on the other hand, the sound is rustling and the viewer doesn’t understand what’s being said, it gets turned off immediately.

2. Duplication is not a problem

One of the cheapest formats as far as production costs go is video blogs – in other words, a kind of alternative to a written commentary.

A few years ago, TV SME regularly produced videos which were basically a narration of printed commentaries. The author of the original commentary repeated his main arguments in slightly different words in front of the camera. Here’s one example from many:

There was a fear of duplication in the beginning, the main one being that users wouldn’t see the added value and therefore wouldn’t watch the videos. There was also the opposite concern that video would reduce the audience for the written commentaries.

Neither of these worries was confirmed. On the contrary, both video commentaries and their written counterparts had equal viewership and readership even though they were both placed on the homepage very close to each other.

Perhaps one of the most important things we learned is that it’s possible to create a viewer habit on the Internet, just as with television. Basically, you need only one thing: regularity.

A video is, of course, parked on the website all the time and doesn’t need an allotted broadcast time           like in television, but if you’re making a video series connected by a theme or author, it’s important that the time you premiere the video is the same, as is the place on the home pageHome pageThe page designated as the main point of entry of a Web site (or main page) or…

One of the most successful TV SME formats was “Tomas Hudak’s World”, a humorous program summarizing the most important events of the week.

The premiere of each new episode was on Thursdays at 8pm on the Sme.sk homepage. In the rare instances when the video didn’t appear on time, we soon received exasperated reactions from viewers asking what the problem was.

Mainly thanks to regular broadcast times, the program maintained relatively stable minimal viewership and did not drop below 20,000 views per episode. 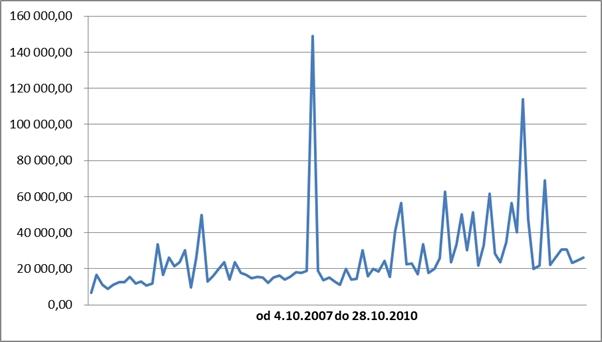 When Tomas Hudak’s World ended, it was replaced by a similar humorous program with a different hostHostAny computer on a network that offers services or connectivity to other…

Without regularity, you might find it difficult to create a stable viewer base. And without that, your viewership numbers will fluctuate or you may need to put in more energy and money for promotion.

In every country, there’s a lot of video-ready content that classic TV stations don’t want – either because it’s short, it doesn’t fit their various standards or simply because it addresses a niche target group and, in relation to the production costs, is therefore uninteresting

All of these are unattractive for large TV stations. Much of this content is financed from entry fees or a non-profit activity and will take place whether a camera is present or not.

For video portals, the largest cost can thus end up being the sending of two camera people for shooting and one video editor to select the five most interesting sequences from a one-hour debate.

5.  Popular yet cheap formats do exist

For TV SME, here are some of the economical but popular formats (in order, starting with the cheapest):

Video blogs – Basically a talking-head who comments on a current event. The success of the format lies in how strong the topic is or how controversial the opinion is (which should be made clear in the video title).

Lectures – Another talking-head, occasionally with a PowerPoint presentation behind him or her. This may sound uninteresting, but a video in this format from TV SME won the Slovak Google Award for innovative approaches to online journalism in 2012.

Compilations – YouTube is swamped each week by new “failure” compilations. A similar genre can be used in professional journalism. You’ll need a host with authority and personality who’ll regularly select and present the best videos – e.g. the most interesting sporting moments of the week – with a commentary. Besides the above-mentioned Tomas Hudak’s World, which compiled the most interesting global political events, TV SME has developed a successful program about movies built on the same principle. The ratio of production costs versus viewership makes compilations the most attractive original format for a beginner video portal.

Discussions – Several regular discussion programs about politics were recorded in a small TV SME studio. Others were recorded in theatres or were taken from public television. 99% of these broadcasts were pre-recorded – live streamingStreaming1) technology that permits continuous audio and video delivered to a computer…

Reviews – if there is a format where video clearly has an advantage over written text, it’s reviews. It’s better to see how a mobile phone looks and works than to read about it. The most successful reviews done by TV SME were reviews of cars.

Reportage – Abroad term but in the case of TV SME, reportage meant mainly two ways of working with video:

While reportage is the king of online video formats, it’s also the most complex in terms of time, funds and preparation of the editors.

For more examples of how to do it well and how to tell a story through video, I recommend you visitVisitA single continous set of activity attributable to a cookied browser or user…