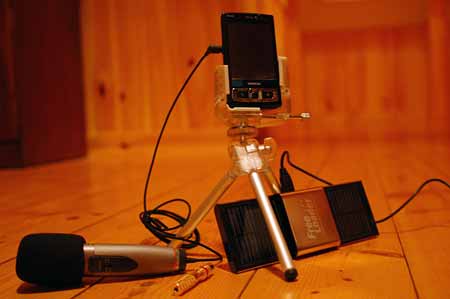 Smartphones aren’t just revolutionising the way that news and information is delivered but also how journalists are able to report. Journalists have seen how members of the public have been able to use smartphones and tools like Twitter to capture and post text and images, Audioboo and Soundcloud to record audio, and YouTube to post video, and they have realised that there is an opportunity to use these tools for journalism too. Photos The cameras in mobile phones long ago became good enough for high quality images, even by the standards of professional photojournalists, and that innovation seems set to continue with Nokia’s Pureview line of mobile phones, boasting a 41 megapixel sensor and excellent Carl Zeiss optics. The Nokia is as good or in some cases better than standard digital cameras and outperforms mobile phone cameras such as Apple’s iPhone 4S and HTC’s One, both of which have boasted about the quality of their cameras. Audio and Radio Some radio reporters are also now using smartphones to record and edit their radio packages. One radio reporter in the US even went as far as trying to see if he could do his entire job using nothing more than an iPhone, and he shared his experiences, the software and kit that he uses for his ultra-mobile reporting set up. Radio reporter Neal Augenstein said that iPhone-only isn’t perfect, but he rated the sound quality as 92% as good as the reports that he made with “bulky broadcast equipment”. Two things he learned:

Video and Television Now the video capabilities of smartphones are getting to the point where they are capable of serious journalism, and in difficult situations such as the conflict in Syria, they offer opportunities to journalists that weren’t possible before.  The BBC’s Middle East bureau chief Paul Danahar shared his experiences of using a smartphone, again an iPhone, to report from the scene of an alleged massacre, Qubair. He was able to get to the village with UN observers but as he was not in Syria on a TV assignment, he didn’t have broadcast equipment with him, only his smartphone. On the BBC College of Journalism blog, he goes into detail about how he created the report and some of the challenges, including slow upload speeds and sound. The microphones on mobile phones can be susceptible to wind noise. Key lessons and observations:

If any of your journalists use mobile equipment to report, they could find some useful insight in Danahar’s honest summary of the motivations for using mobile equipment and his experiences. While many journalists in the US and Europe use iPhones, it is not necessary to use Apple equipment, which may be prohibitively expensive.  A number of inexpensive Android-based smartphones will do much the same thing at much lower prices. The key to remember is that regardless of the equipment, you’ll still need to remember good multimedia techniques. Other resources: