Yahoo’s Flickr might not be as well known as other photo sharing sites, but it has a number of features that make it incredibly useful for journalists looking for user-generated content.

Flickr has enjoyed a renaissance recently with the launch of an updated mobile app to allow it to compete with mobile photo services such as Instagram, which is owned by Facebook.

What is it useful for?

Flickr can be a great source of images, but it is important to understand what it is good for and when you probably are best relying on more traditional methods:

Licencing: Can I use this photo on my website?

One benefit of using photos from Flickr rather than Twitter or Facebook is that images have clear licensing terms and you know which photos you can use legally. Everyone on Flickr retains full copyright to their photos, but some people choose to pre-emptively licence their photographs for reuse. Photos that are not licensed will carry the copyright symbol and the text “All Rights Reserved” on the photo pagePageA document having a specific URL and comprised of a set of associated files. A…

If a Flickr user wants to pre-emptively grant certain permissions for the reuse of their images, they can choose one of several Creative Commons licences. Creative Commons is an easy way for creators to tell others how they would like creative work – photos, images, writing, videos, etc – to be reused and on what terms. Note that creators still retain traditional copyright to their works.

Attribution means:
You let others copy, distribute, display, and perform your copyrighted work – and derivative works based upon it – but only if they give you credit.

Noncommercial means:
You let others copy, distribute, display, and perform your work – and derivative works based upon it – but for noncommercial purposes only.

No Derivative Works means:
You let others copy, distribute, display, and perform only verbatim copies of your work, not derivative works based upon it.

Share Alike means:
You allow others to distribute derivative works only under a licence identical to the licence that governs your work.

For most news organisations, you’ll want to use photos that have either Attribution or Attribution-No Derivative Works licences. If you use a photo with a No Derivative licence, you can resize it but not crop it or alter it. For most Flickr users, if they use a non-commercial licence, they do allow for news use. However, Creative Commons users will often have more detailed information on their profile page. For instance, US space agency NASA uses the non-commercial licence but does allow for news use as is explained on the agency’s profile page. NASA explains the terms of use for the photos that it posts as this:

These official NASA photographs are being made available for publication by news organizations and/or for personal use printing by the subject(s) of the photographs. The photographs may not be used in materials, advertisements, products, or promotions that in any way suggest approval or endorsement by NASA.

If you’ve ever used the advanced options for search engines, many of the options here will be familiar. For instance, you can search for an exact phrase or exclude terms for your search. There are other options that are specific to Flickr. For instance, if you are a Flickr user, you can search your own photos, photos you have favourited, photos from you contacts and photos from your friends and family. You can also search special photo collections on Flickr as well. These include:

At the bottom of  the page, you will see the options to limit your search to only look for photos with Creative Commons licences.

By selecting the first option, you will limit your search to only photos using a Creative Commons licence. The next option will limit your search to photos that can be used commercially, and the final option will search for photos that can be modified, meaning that they lack the No Derivatives licence. Note that this will not exclude photos with the Share Alike licence, so be careful to look out for that in photos you want to use. 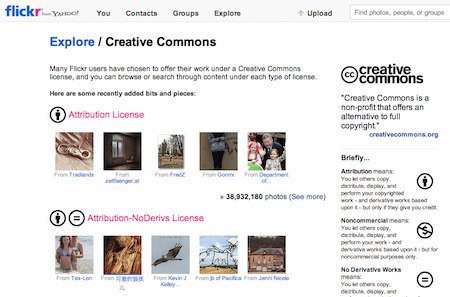 The first two groups include photos with the appropriate licences. ClickClickA click can denote several different things. It can be a metric that…

You can sort your search by “Relevant – Recent – Interesting”. Relevant and recent are self-explanatory. But what does Flickr mean by “Interesting“? Flickr explains interesting this way:

There are lots of elements that make something ‘interesting’ (or not) on Flickr. Where the clickthroughs are coming from; who comments on it and when; who marks it as a favorite; its tags and many more things which are constantly changing.

In a lot of ways, it’s a mark of popularity. You’ll notice that we frequently use Creative Commons photos from Flickr here on Knowledge Bridge. I include the attribution in alternative text of the photo so even if there isn’t a caption that the attribution is still available. For photos that require attribution, it’s best to include the title, when relevant, but you must include the photographers name, the agency name if it came from a governmental agency, or the Flickr user name if no real name is given. Flickr appreciates it if you say that the photo is from Flickr, and when using Creative Commons photos, you should also note, Some Rights Reserved to make it clear that the photos are not from a wire service or your own copyright. For instance, for the photo above, a correct photo credit would be:

If the photo isn’t from a government agency or official account, you will want to verify the source of the image. Flickr also helps you do that, which we will cover in another guide.

Flickr is a valuable service for journalists because it retains a lot of information that will help you know with confidence not only the licence of the photo but also its source. It is why a number of journalists use it as a source for photos for their stories when they cannot get a photo through traditional means.