Using ad networks as a base for your digital revenue

When a site is just getting off the ground, publishers often turn to ad networks because it allows them to generate revenue without investing in a sales force. As you grow and after you make the necessary investment in an ad sales force, ad networks still can help you reachReach1) unique users that visited the site over the course of the reporting period,…

Competition is fierce amongst ad networks with a myriad of regional and global players. One online directory lists 380 networks. Out of the hundreds of ad networks available, many publishers start with those from search engines such as Google and Yandex, the dominant search engineSearch engineA website that provides a searchable index of online content, whereby users…

Google AdSense and Yandex Direct are also easy to set up, and we’ve created guides on how to get started with AdSense if you aren’t already using it as well as a guide on how to measure and maximise revenue when using AdSense. We will be writing a similar guide for Yandex Direct in the near future. However, as we said, there are hundreds of ad networks. To help decide which ad network or networks is the best for you, you’ll want to consider:

For Mediazavod.ru, the website of MDLF client Chelyabinski Rabochiy, Yandex seemed to be the easiest way for the site to get started with digital advertising back in May 2010, said editor Dmitry Konoplev, adding that another appeal of Yandex Direct is that it delivers 45% of the revenue per click to the publisher.

Revenue from Yandex Direct has risen in line with traffic. As Mediazavod’s experience shows, one positive thing about ad networks is that even as traffic rises, it does not dilute the return, and Yandex Direct now provides 16% of advertising for the site. Building traffic is key to building revenue, both in terms of driving higher revenue from ad networks but also in making your site attractive to premium advertisers. 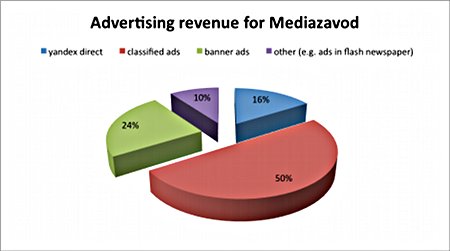 Apart from working to grow the traffic to your site, Knopolev says that it is important to develop content that will perform well, using the contextual advertisingContextual AdvertisingA form of targeted advertising on a website that is relevant to the page’s…

“Articles about real estate, technology, music and cinema are much more attractive for ads than publication about (news) and social ills,” he said. Of course, content that works well for ad networks must be balanced with news content because news attracts the greatest numbers of readers and therefore the most traffic, he added.

One criticism of ad networks is that they don’t deliver relevant ads or in the worst case place ads that could be seen as being in bad taste. Knopolev gave the example of funeral services advertising being placed alongside a story about the death of an ex-governor, or worse yet if weapons ads were placed next to a story about a shooting.

Sometimes it stirs up our readers and they write angry posts on Twitter, he said. It is not always possible to change the context settings, however, both Yandex  Direct and Google AdSense have words you can eliminate from being used in delivering advertising – words such as death, funeral, gun, disease, drugs and sex.

Once you’ve built traffic to the point where your site can attract advertising agencies and your sales staff can sell premium advertising on your site, ad networks won’t be as high of a priority. As the revenue mix at Mediazavod also shows, classified advertising can be an important source of digital advertising revenue.

The site is focused on growing its already substantial premium advertising revenue, and ad networks cannot match the return they are getting from this type of advertising.

Chia also says that it is important to view your advertising as part of your content. Readers judge your site based on the quality of the content you produce and also the quality of your ads.

Seeing ads that are clearly from Google AdSense detract from the premium image she is trying to create for the site to attract high value advertisers, she said, and in their use of AdSense, they take care to use the ad format that less clearly marks the ad as coming from AdSense.

They also use other ad networks such as Malaysia’s Innity and Indian ad network Komli, which have ad formats that are less easily identified by readers.

With the site now well established, they also make sure that any ad network ads are given less prominent placement on the site, which frees up the most valuable ad slots for their premium advertisers.

However, even for a well established site, ad networks can still play an important role for an independent news site like Malaysiakini. In Malaysia, many of the biggest brands and advertisers are GLCs – “government linked companies”. GLCs and other major corporate brands might hesitate to advertise with an independent news site like Malaysiakini which can be critical of the authorities, but the site was able to have advertising from major brands like the state-owned oil company Petronas via an ad network.

Although Malaysiakini has graduated from relying on using ad networks to attract premium advertisers, she says they can still play a role, especially for sites just starting out. Now, Malaysiakini earns ten times more with its own sold ads above the rate paid for ad networks, and it has been able to double its advertising revenue in the past year.

Next month, we’ll look at how to move up the value chain and use more advanced advertising techniques to increase advertising performance.