Using a Facebook page to bring fans to your site

The whole world is talking. Social media has exploded as one of the key digital phenomena in the last five years, and news organisations have rushed to catch the attention of the millions of people who spend hours each day following celebrities, friends and trends using social media.

The growth of social media has been stunning.

Of course, the use of social media was on full display last year during the Arab Spring. The Dubai School of government estimates that the number of Facebook users across the Arab world almost doubled from November 2010 to November 2011, rising from 19.9m to 36m.

Savvy news organisations are tapping into this explosive growth, and the results can be very impressive. One only has to look at how Al Jazeera has used social media to fuel its rise, not only in the Arab world but globally. Al Jazeera English has more than 1m fans on Facebook, and Al Jazeera Arabic has twice that.

It’s not just about being popular on Facebook. Social media can drive traffic to sites. When Hosni Mubarak stepped down as president of Egypt, 71% of traffic to Al Jazeera English content came from social media, according to ChartBeat, a “real-timeReal-timeEvents that happen “live” at a particular moment. When one chats in a chat… 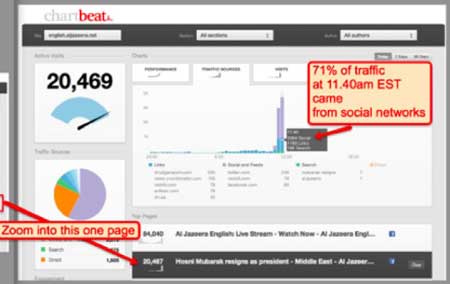 MicrobloggingMicrobloggingPublishing very brief, spontaneous posts to a public Website, usually via a…

News organisations can get started using social media with very simple strategies, building on them as they see what works. One simple way to leverage the audiences on Facebook is to create a page. Pages are more appropriate for news organisations than a profile or a group.

Facebook pages have business specific tools that will help you engage your audience and also to measure that engagement. They are indexed in search engines so can help increase your overall online profile. You can also message anyone who likes your page or target messages to specific demographic groups within fans of your page.

Nepali radio network Ujyaalo 90 created a Facebook page in order to take advantage of the fact that the social network was the most popular site in the country, according to web statistics site Alexa.

The small online team set up a Facebook page and linked it to their site so that a new post was automatically created every time they posted an article on their site. Facebook pages can use the many apps available on the service, and services such as RSS Graffiti allow you use RSSRSS (Really Simple Syndication)RSS or “Really Simple Syndication” is a process for publishing content on the…

There is value in choosing what to post and carefully monitoring what your audience responds to both using Facebook Insights and also using your own site analytics. It’s key to see not only who comments on the posts in Facebook but also which posts on Facebook drive the most traffic to your site. The Ujyaalo 90 team in Kathmandu found that live reporting of cricket and football scores on Facebook and micro-blogging service Twitter were popular with users.

To initially build traffic, MDLF Senior Advisor for Digital Media Ross Settles says: “Start by getting a core group of Facebook influentials to follow the page. Find them and email them directly if you have to.”

Once you have a core set of users, it might be appropriate to create an ad on Facebook to promote your page. Facebook allows you to use the information that it has about its users to target ads to very specific groups, making sure that your ad reaches your audience. The Ujyaalo 90 team promoted the page to domestic and overseas Nepali Facebook users.

The Facebook marketing campaign has been very successful, with the number of “fans” of the page increasing from 706 on 1 September 2011 to 23,703 by the end of the April 2012. Ujyaalo 90 aims to more than double its number of fans by the end of 2012, says Gopal Guragain, the executive chairman of Communication Corner, the parent company of the Ujyaalo 90 Network. 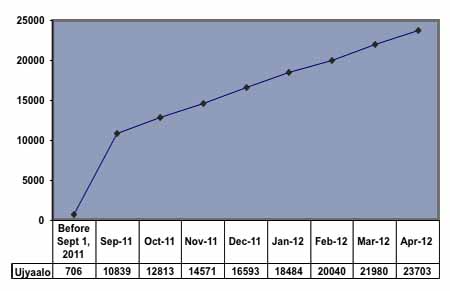 After launching the page, visitors from Facebook rose rapidly, increasing in two months from 1% of the traffic to 13%. Since then traffic from Facebook has doubled, and it now is the biggest source of traffic to their site, according to Alexa.

Creating a Facebook page is one simple step that has allowed a relatively small online staff to tap into the audience on the social network.

The key to digital success is to constantly measure the success of not only your social media strategy but your digital strategy in general, making small adjustments when necessary to meet your editorial and business goals.

Lastly, remember to make sure that your social media strategy benefits your site and not just Facebook. The ultimate goal is to drive traffic to your site and your ads, not just give people another reason to spend more hours in Facebook. Maximizing referrals from Google search and social media are essential elements in any strategy for building digital audience, and creating a Facebook page is a good first step to increase traffic from one of the world’s leading social networks.