Traditional versus digital ads: ‘Reach’ versus ‘each’ 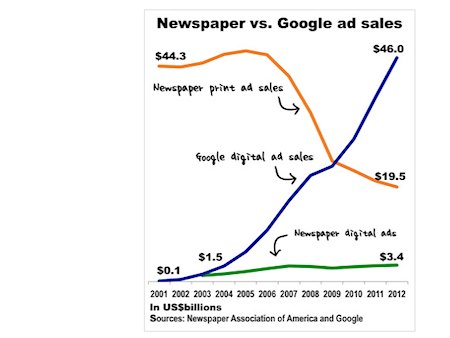 In the early phase of any media transition, we rely on what we know and try to adapt the thinking of the current medium to the new media. In the early days of television news, broadcasts were often little more than a radio newsreader sitting in front of a camera. It took time for us to understand how TV was different and how best to use this new visual medium.

The changes in thinking needed to effectively adapt to a new medium are not just editorial but also commercial. Alan Mutter, who has worked in newspapers and in digital media start-ups, has succinctly summarised the changes that digital media has brought to advertising as a matter of the traditional media model of ‘reach’ versus the targeted digital model of ‘each’.

Pre-digital advertising relied on reaching as many people as possible, while not being as concerned with targeting specific audiences or consumers. To the extent that it was possible to reachReach1) unique users that visited the site over the course of the reporting period,…

As we’ve discussed a number of times here on Knowledge Bridge, one of the biggest challenges in the digital transition is that news organisations face a new class of competitors for digital ad revenue, and one of the biggest mistakes that newspapers, in particular, made is that they continued to view their competition as other newspapers or other news media, instead of appreciating the competitive threat posed by new digital competitors such as search engines and social networks. Looking at more than a decade of data, Mutter lays out the dire consequences of this miscalculation:

In less than a dozen years, this upstart start-up built a $46 billion advertising business that was twice as large last year as the combined print and digital ad sales of all of the 1,382 daily newspapers in the land.

Mutter accuses the newspaper industry of a lack of imagination and says that it simply tried to apply the traditional advertising model to digital, while completely failing to understand that a different advertising model based on harnessing user data to deliver highly relevant, targeted and efficient ads was dominant in digital. Mutter says:

Newspapers (along with magazines, billboards and broadcasters) represent the traditional but inefficient “reach” model of advertising, which depends on spreading a commercial message to as large an audience as possible in hopes of connecting with qualified customers who happen at the moment to be receptive to it.  Google, on the other hand, represents the highly efficient “each” model of advertising, which lets marketers put customized commercial messages next to only the results of searches containing specific keywords they have selected to target their ads. The Google system not only enables marketers to target exactly the right prospect at the right moment but also makes it remarkably easy to monitor response rates and, thus, measure an ad’s return on investment in real time.

The key question for publishers and media executives is how to respond to this competitive threat. Mutter gives some advice.

Understanding this key shift from ‘reach’ to ‘each’ advertising will help you develop strategies that more effectively compete against new digital competitors as you seek to grow your digital advertising revenue. The game has changed, and you need to grasp these changes if you want to win.