The Best of Days and the Worst of Days: Journalism in the Digital Age

When visitors to Nepal arrive at Kathmandu’s Thibhuvan International Airport, they are presented with an advertisement from one of the country’s two national mobile service providers “3G Mobile @ Mount Everest”. 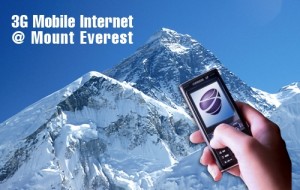 The ad is a sign of the times for Nepal where owning a mobile phone has become common throughout the country, even on the slopes of Mt.  Everest.  The Nepal Telecommunications Authority reports that in August 2013 mobile phone penetration reached 72% of the population.  Mobile “smart phones” have also contributed to the rapid increase in Internet penetration in Nepal, growing from 19% in 2012 to almost 27% in August of 2013.

Newspaper publishers in Nepal have begun to experience the early stages of their audience’s shifting media habits.  Consequently, Nepal’s Centre for Investigative Journalism hosted “Doing Digital” a seminar for publishing executives trying to understand the challenges and opportunities presented by the digital transition.  MDIF presented “Journalism in the Digital World” a summary of the opportunities and the challenges presented by readers, listeners and viewers all merging to become the digital audience.  The digital transition is clearly a tale of the best of days and the worst of days, the good and the bad.

Journalism in the Digital World – November 2013 from MDIF

For publishers, the best of days is epitomized by the wealth of new tools and techniques.  Digital has made online story-telling a new narrative form combining the use of text narrative, audio, video, data and infographics.  Examples discussed included the New York Times’ Pulitzer Prize winning “Snowfall” as well as other examples from around the region.  The discussion highlighted two key points.  First, for these multimedia stories to be successful, journalism has to be combined with technology.  Second, the recognition that most publishers do not have the resources of the New York Times and that there are free or low cost tools like Timeline.js to help publishers tell multimedia stories.

Digital technology has also made data journalism a new opportunity for journalists and their audiences to find patterns and stories in the data.  Data journalism like Veja’s Rede de Escandalos provided tangible example of data journalism’s reporting power.   One of Brazil’s oldest news magazines, Veja used its own past reporting on scandals in Brazil to create a unique database of scandals, actors, government bodies involved in each scandal.

Finally, digital technology revolutionizes the way publishers, editors and reporters communicate with their audience.  Digital in many cases has turned audience communication into stories.  India’s website “I Paid A Bribe” website demonstrated how audience engagement and communication can create ongoing coverage of key themes, like corruption.

But publishers attending the seminar also focused on the business models needed to survive the transition. Unfortunately, the discussion of business models presented the challenge facing all digital publishers, where will online revenue come from.  The challenge is acute in countries like Nepal, where audience adoption of online has grown much faster than local advertisers’ transition to online.

During the seminar, MDIF discussed several examples of revenue streams that publishers should evaluate as they begin to actively publish online.  Since online advertising remains a very small revenue opportunity in Nepal, the discussion focused on enterprise and project social funding services, often called crowdfunding.  Crowdfunding services have expanded greatly with regional specialists, like Africa’s mobile fundraising platform M-changa or industry specialists like IndieVoices, which focuses on independent media and journalism projects. In addition to crowdfunding, syndication and content expense sharing partnerships were also discussed where two organizations partner to share the cost and potentially the revenue of a digital reporting project.  Finally, different subscription and paid content models were presented.  Though many of the Nepali publishers believed that the technology to easily collect revenue from their online audience was not yet available in Nepal.

Nepali media and media in any region undergoing a rapid digital transition face both opportunities and challenges.  Digital reporting and story telling tools have created a whole ways of communicating a story.  But, these new tools require training, technology and infrastructure support.  None of these are free.  Revenues from advertisers typically lagLagThe delay between making an online request or command and receiving a response.…//read more  the audience’s move to digital platforms, creating a gap in digital’s ability to generate revenue.  This leaves publishers who move online with the challenge of how to generate some new revenue to support these new requirements.  CIJ Nepal’s seminar for regional publishers created a foundation for an active discussion and experimentation with both the opportunities and challenges facing Nepal’s traditional print media.