Newsweek magazine returns to a print edition after one year

Newsweek was a vital weekly magazine that competed with the Time magazine for decades but had not adapted to the new digital world well, so in October 2012, it announced the end of its print edition and continuing as a digital-only publication.

Newsweek was founded in 1933. In 1991, it had about 3.3 million readers. But the dawn of the Internet eroded its readership and advertising revenue. In 2010, the Washington Post Company sold the magazine for US$1. In August 2013, the magazine was acquire by International Business Times Media.

The re-launched print edition will be positioned as a premium product, costing subscribers more than it used to. It will contain 64 pages and rely on subscription sales more than ad pages to keep it in print. Its new owner hopes to hitHitThe record of a single online transaction event stored in a log file. One page… 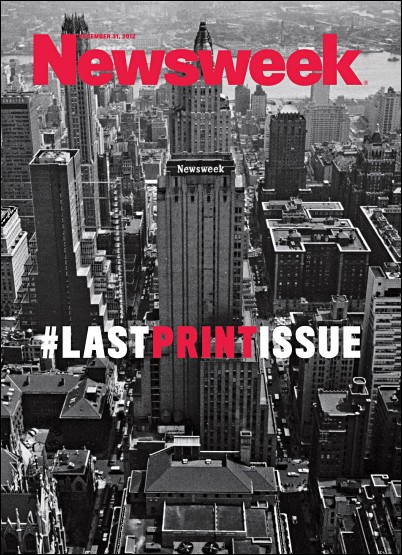 The cover for the final print edition of Newsweek released in December 2012.

Basics of web analytics by BBC AcademyAttention-based measurement instead of clicks and CPM?Data-driven journalism: The process to transform raw data into storiesUK daily newspapers have doubled in price since 2004 and shrunk in sizeJournalists are more negative about their work