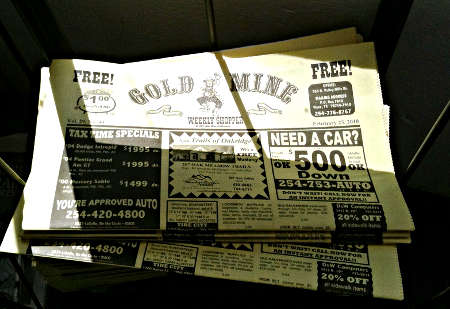 There is hardly a week that passes by when we don’t read of some bad news or other about the media industry. More and more papers are reporting circulation declines and many have cut down on the number of publication days.

Just this month, a business information analyst, IBISWorld, reported that revenues for newspaper publishers in Australia are expected to drop by 4 per cent this year – from $6.7 billion to $6.4 billion. IBISWorld general manager Karen Dobie was quoted as saying:

Declining circulation over the past five years, caused by time restraints, the rising popularity of new media like the internet, pay-TV, and mobile devices, and competition from consumer magazines has continued to have an adverse affect on the industry.

That story is not unfamiliar to newspapers worldwide. While the declines in the US and Western Europe are well known and well reported, those regions are not alone is seeing print circulation decline. A recent report by the International Federation of Audit Bureaux of Circulation showed that from 2010 to 2011 declining print circulation even spread to the Asian giants of China and India, which had been seen as bright spots in terms of print as rising affluence and literacy increased newspaper sales.

As print circulation comes under pressure, sadly revenue follows it. Indeed, new media has taken a huge toll on one particular area for newspapers – the classifieds pages.

What once used to be referred to as “rivers of gold” has slowed down to a trickle, with consumers preferring to check out classifieds online where searchability is the prime selling factor.

Not so long ago, for example, the Sydney Morning Herald’s Saturday paper was packed with 120 pages of classifieds. But today, it is much less than half that. Classifieds for property, cars and jobs have migrated online with a vengeance.

Newspapers are, in large part, to blame for this predicament.

For years, they stubbornly refused to put their classifieds online, giving non-traditional players such as Craigslist, eBay and new entrants such as iProperty, PropertyGuru.com.sg and carsales.com.au.

iProperty has sites in Malaysia, Singapore, Hong Kong, Indonesia, The Philippines and India, and in some cases multiple sites in one country – all targeted at taking away a slice of revenue from print media.

It has diverted some of the revenue from Singapore Press Holdings (SPH), which owns more than 10 newspapers in Singapore. For many years, its flagship paper, The Straits Times, refused to put its classifieds online for fear that if classifieds were available online, few would advertise in the printed paper.

Meanwhile, other hitherto unknown players entered the market. For nearly a decade, they were allowed to grow with little fightback from the SPH group.

“Our online competitors have grown strong through the years. In fact, for some of them, we had allowed them to grow,” SPH’s vice president and head of its online classifieds, Johnson Goh, confessed at the Digital Media Asia conference held in Kuala Lumpur last November.

SPH saw its classifieds’ revenue decline while, at the same time, the number of adults using online classifieds doubled since 2005.

Newspapers begin to fight back

“If our classifieds were going to lose business to online players anyway, there was no reason why we should not have our own sites,” Mr Goh said.

In June last year, it launched the first of several vertical, or niche, businesses. STJobs, a recruitment and employment site, took off, followed by STCars, STProperty and a general classifieds site, STClassifieds.

It was a resounding success, said Mr Goh. STJobs has chalked up 10 million pageviews since it was launched.

Similar stories of newspapers coming late to the party can be found around the world – and some are success stories too.

Sweden’s Schibsted is a case worth studying for those interested in the online battle. A major publisher of newspapers including Norway’s biggest paper, VG, Schibsted has gone into online classifieds aggressively. Its aim is to be the No.1 online classifieds site in the world.

In the spring of 2008, Schibsted brought all its online classified companies into Schibsted Classified Media.

Already hugely successful with its Blocket.com classifieds site in Sweden, the company decided to take the model around the world. It launched Blocket or Blocket-like sites throughout Europe.

Not content to sit back, Schibsted has set up operations or entered into partnerships with local groups in Asia, Eastern Europe and Latin America.

The sites take on distinctly local names, such as ayosdito in The Philippines, chotot.vn in Vietnam, liaomaimai.com in China, sahipasand.com in India and mudah.my in Malaysia.

SCM’s annual report for 2011 says gross operating revenue rose to €264.1 million from €213.7 the year before. Of this, the international business generated €75.1 million.

South African media giant, Naspers, too has employed a similar strategy. Early during the online boom, Naspers bought into TenCent in China. Today, TenCent is one of the biggest players in China, and in terms of sheer size and numbers, in the world.

Naspers has moved rapidly into a range of products including Russia’s Mail.ru, Brazil and elsewhere, with classifieds offerings such as Dealfish, Gadu-Gadu, kalahari.com, lelong, PayU, PriceCheck, Sanook!, and TravelBoutique Online.

Clearly, it is no longer the local market or even hinterland countries that is attractive to some of these major players. The world, indeed, is their oyster.