Trendwatch: The mobile web is the only web for many

Trendwatch is a regular feature of the Knowledge Bridge Digital Briefing, we’ll bring you the latest statistics and digital trends to help inform your next steps in the digital transition.

When people say digital, often the first thing they think of is a computer, but for much of the world digital and digital content means mobile.

Not only that, but in many parts of the world, mobile is the only way that they access the internet and digital content, according to research by desktop and mobile browserBrowserA software program that can request, download, cache and display documents…

Despite the rise of Apple’s iPhone and hundreds of smartphones running Google’s Android mobile operating system, the Opera browser remains quite popular, especially in emerging democracies because it works on a wide range of phones, and Opera has a cachingCachingThe process of copying a Web element (page or ad) for later reuse. On the Web,…

In Opera’s latest State of the Mobile Web report, the browser-maker claims 169m users worldwide, and of those, 56% only access the web on their mobile phones. 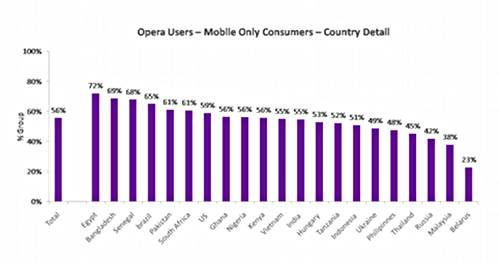 What are they doing on the web on their mobile phones? Searching and updating their social networks top the list with more than 60% of Opera users saying they accessed those types of sites on their phones.

The mobile web is a global story, especially as countries like Angola choose to roll out next generation 4G wireless technology to help position their economies for future growth.

With audiences embracing the mobile revolution around the world, it’s time for news organisations to prioritise mobile in their digital strategies.