Every year, technology watchers wait for the latest forecast by Mary Meeker, a fabled analyst known for uncanny ability to spot trends.  She has just released her latest annual report on the present and future of the internet, mobile and technology in general. Her presentation, available online, is filled with information and the kind of future-gazing insights that she has become famous for.

Emerging markets continue to power global internet growth with Asian-giants China and India leading the way. China alone added 215m new internet users in the last year. That’s not terribly surprising considering the two countries’ economic growth rates. Rounding out the top five in terms of new internet users were Indonesia, the Philippines and Nigeria. The Philippines increased its internet population by 44%, which means that 35% of the population now has access to the internet.

More interesting is the growth of 3G wireless data access. The BRICs – Brazil, Russia, India and China – had incredible year-over-year growth rates in terms of 3G usage, but much of that is down to the growth starting from a low base. For instance, 3G users might have increased by 45% last year in Russia, but that still means that only 8% of mobile phone subscribers have 3G access. In India, which has seen its mobile telecom sector rocked by scandal, 3G subscriber growth might have increased by 841% but that is still only 4% of users. The mobile data revolution is obviously picking up pace, but it still has a lot of room to grow before it becomes common, much less ubiquitous.

Mobile, including data, smartphones and tablets, has been one of the hottest trends in the last few years to the extent that tablets are now seen to be cutting into PC sales, denting the prospects of major computer manufacturers such as Dell and HP. However, Meeker says that based on Morgan Stanley research only 16% of global mobile users have smartphones. Optimistically, she sees a huge opportunities for growth, but the reality is that smartphones still represent a fraction of global mobile users. Mobile strategies, especially in developing or emerging markets, still need to account for the huge use of feature phones – phones that might have some web browsing abilities but aren’t as capable as smartphones.

With all of the buzz around mobile, it is important to remember that it’s still very early days, not only in terms of mobile content distribution but also in terms of developing the business to support it. Globally, mobile app plus advertising revenue has grown from $0.7b in 2008 to $12b in 2011. 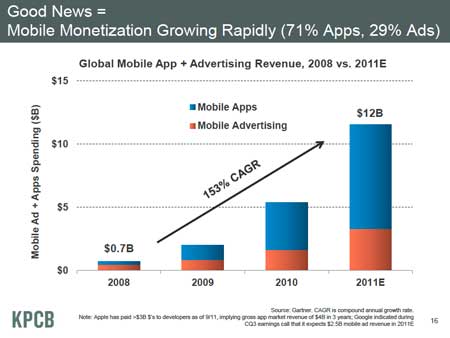 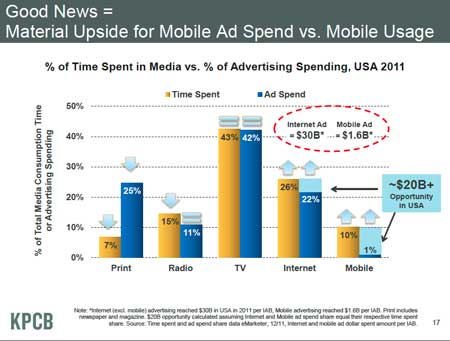 Again, Meeker played up the huge potential for an increase in mobile advertising, but at the moment, mobile advertising still returns very limited revenue. Moreover, she pointed out that mobile ad rates were five times less than desktop internet ad rates. Realistically, the potential for mobile is huge but it has yet to realised. Meeker said that the desktop internet proved that “advertising dollars follow eyeballs” but “it just takes time”.

Other takes on Meeker’s presentation:

The full presentation is below: