We recently looked at digital analyst Mary Meeker’s forecast for 2012, and one thing she highlighted was the unrealised potential of mobile advertising. She saw tremendous growth possibilities because mobile advertising revenue lags far behind the amount of time and attention that people are spending on their mobile devices. As always, she was bullish about the future growth potential especially because of the lessons learned from digital advertising on the web.  According to tech site ReadWriteWeb she said, “The desktop Internet proved that advertising dollars follow eyeballs … so it’s just a matter of time before mobile attracts dollars.”

Former Apple executive Jean-Louis Gassée warns that we might be falling into what he called “an age-old and dangerously misleading algorithm”:

The [new thing] is like the [old thing] only [smaller | bigger]

With respect to mobile advertising, he sees this formula playing out this way:

Now we have advertising on smartphones, and we’ve fallen into a comfortable, predictable rut: “It’s just like Web advertising on the PC, shrunk to fit.” We see the same methods, the same designs, the same business models, wedged onto a smaller screen.

Gassée points to another observation by Meeker that attention is very fragmented on smartphones. Although people are spending an increasing amount of time with their smartphones, not all of this time is spent on activities that might be advertising-supported. More than 40% of time spentTime SpentThe amount of elapsed time from the initiation of a visit to the last audience… 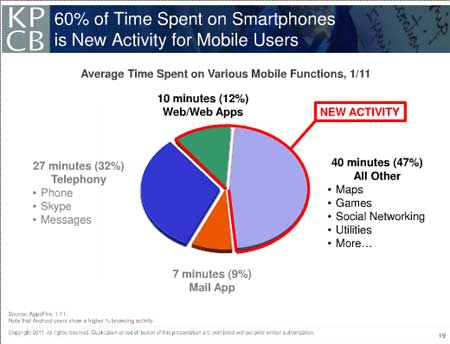 We’re not paying (a loaded word) the same type of attention as we do on a PC.