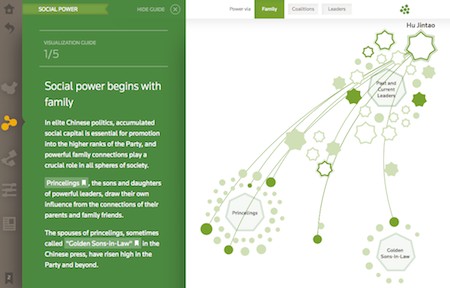 With the current level of excitement about data journalism, teams around the world are developing not only new ways to analyse and display data but also new forms of storytelling that leverage its power. Data journalism is not simply about charts, graphs and visualisations, it can also be used to weave together images and text with those numbers to create incredibly rich stories.

One of the most recent examples is Connected China, a project from Thomson-Reuters, that looks at the relationships between China’s leaders, its institutions and its elites. Reg Chua, the data and innovation editor at Reuters, explained the project on his personal blog:

It’s a little hard to sum up simply; at one level, it’s a microsite that focuses on looking at power in China, explaining how it flows, the key players and institutions, and their relationships, featuring stories and rich multimedia (including fantastic archival footage.) But it’s much more than that: It’s also a series of innovative data visualizations that pull from a rich, underlying database of people, institutions and relationships to illustrate the connections, careers and positions of key officials in China. And more than that: It’s a great example of how the combination of data. visualizations, stories and multimedia can be much more than the sum of their parts.

The entire micro-site is driven by a huge database:

It’s an amazing database: Tens of thousands of entities, 30,000 relationships, and a million and a half words (not to mention the array of news stories, photos and videos also featured in the app.) The team structured tons of information – connections, the importance of job roles, etc – with an editorial sensibility. In other words, they applied news judgment – but rather than use it just in stories, they used it to structure data.

That is a pretty impressive amount of data, and the power isn’t simply in its size but also the relationships that it helps uncover. Those relationships provide context and show connections that would be hidden to all but the most knowledgeable China watcher. While this project operated on a huge scale, smaller data journalism projects can still deliver important context, such as:

With all of the demands on news organisations, one of the biggest challenges of the digital transition is how to set priorities. Let’s look at some smart ways to use data and how to make a strong business case for developing data journalism in your newsroom.

Reuse your databases – One of the things that digital journalists learn quickly is that it is difficult to justify creating complex, time consuming and expensive digital projects that have only a single use. If you gather or develop databases, think of how to use them and maintain them on an ongoing basis. What data sets are key to your readers? Education? The environment? Political trends? Funding for key local services?

Building databases takes effort, and knowing the kind of databases that will generate the most applications might help you decide which ones to develop and which ones aren’t worth the effort.

Assess potential revenue streams – The days when journalism could afford to be completely divorced from business realities is over, and you will need to be clear on what revenue stream or streams can be generated from your data projects.

Start small before taking on big data – Connected China is a massive project beyond the scope of most organisations, but it still illustrates important concepts about context and the importance of structuring data that can be used on much smaller projects. Structured data can be used to add context to local stories. Also, it’s important to realise that you can build up databases over time rather than thinking that you have to build big right away. There are a number of ways that you can begin to add data to everyday stories which will help you understand how your audience responds to such projects and also guide you in deciding which data projects to pursue.

Measure and learn – Monitoring how your audiences respond is key. Many news organisations find that data projects are extremely popular with audiences. The Texas Tribune in the US has found that its focus on data is appreciated by its readers. A year after it launched in 2009, the Columbia Journalism Review noted that its dozens of interactive databases accounted for three times more traffic than its stories.

When the Guardian launched its famous Data blog, editor Simon Rogers thought it would have a very small, niche following of “techies and developers”, but he has said:

In fact it has become one of the most popular on guardian.co.uk and has developed a very mainstream audience.

This isn’t to say that your audiences will embrace data in quite that way, but you should measure how they engage with your data projects. Do a few small ones and use your analytics to find out which ones work and try to figure out why. This will help you to decide the next step on your data journalism development.

Data journalism is opening up opportunities to tell better stories, to engage audiences more deeply and also to improve commercial results for news groups who understand how to build in commercial goals to their product development. News groups that are developing data journalism projects are finding success in telling stories and also in increasing their audiences.