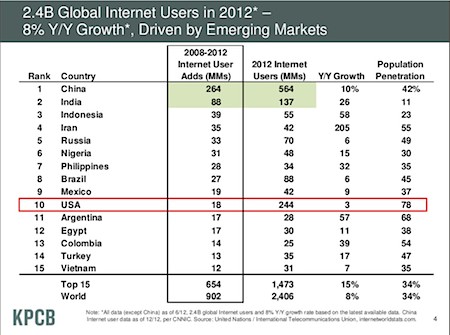 It is not surprising that internet use continues to grow and that emerging markets are largely driving this growth. However, dig a little deeper into famed internet analyst Mary Meeker’s latest annual report on the state of the internet, and you’ll find several important insights for news organisations as they navigate the digital transition.

While some say that Meeker is merely restating conventional wisdom, if you look closely at the data she provides, she is doing more than stating the obvious.

We don’t have a sense of the speed of these internet connections, but the fact still stands that in many emerging markets significant parts of the population now have access to the internet.

In another recently released report, US computer networking giant Cisco said that by 2017 half of the world would have internet access. To put that in context, in 2012 only 32 percent of the world’s population was connected. The report also predicted that the average broadband speed would more than triple from 2012 to 2017.

The key take-away is that in many emerging markets, internet access is reaching a tipping point, and this will lead to a tipping point in digital media access.

Mobile and tablet growth is booming 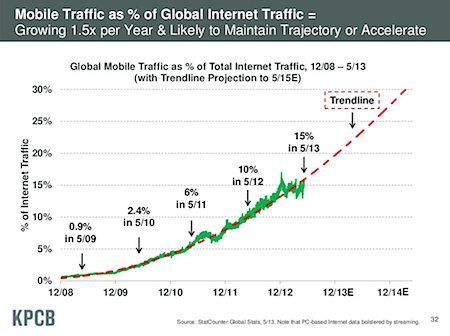 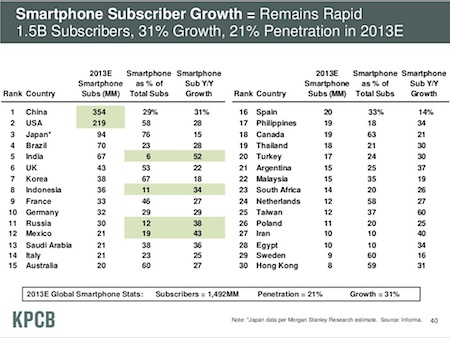 However, the shift to mobile is about much more than the increased use of smartphones. Tablets, most of them based on Apple’s iOS and Google’s Android, have remade the digital landscape in a short time. Android and iOS, whether on smartphones or tablets, have ended Microsoft’s dominance in terms of personal computing.

iPad sales grew three times faster than the iPhone, Meeker said, and while that might seem more relevant to wealthy, developed markets, dramatically less expensive tablets based on Android are being developed for emerging markets. Acer has been developing a $99 tablet for the Indian market.

Of course, the line between smartphones and tablets is beginning to blur as so-called phablets win over consumers who don’t want to have multiple devices. Phablets are large screen smartphones such as the Samsung Galaxy Note or the Asus Fonepad, with its 7-inch screen. Analysts say that phablets are set to sell well not only in the Asian giants of China and India but also in the social-media capitals of Indonesia and Malaysia.

For news organisations, the growth of tablets and large-screen smartphones means that in the future it is more likely that your readers will be using a tablet or large smartphone rather than a traditional computer to read your stories, listen to your audio or view your video.

Publishers and broadcasters will want to make sure that their digital content is optimised for these platforms. 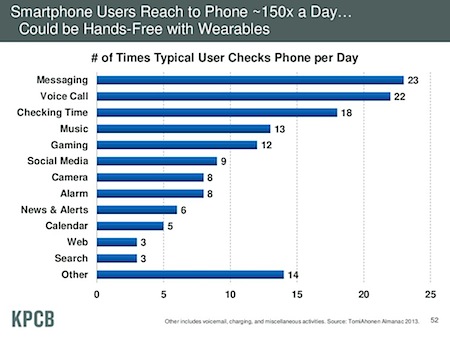 Last year, Meeker highlighted how advertising on mobile lagged far behind the amount of time that people spent with their mobile devices. However, as she showed this year, not all of the time that people spend with their mobile devices is spent consuming content. In fact, of the 150 times a day that smartphone owners reachReach1) unique users that visited the site over the course of the reporting period,…//read more  for their handsets each day, news, alerts and the web account for only 10 times they check their phones. Attention is very fragmented on mobile devices.

Meeker still sees a tremendous opportunity for mobile advertising. In the US, people spend 12 percent of their time consuming media on a mobile device but only 3 percent of advertising is spent on mobile. 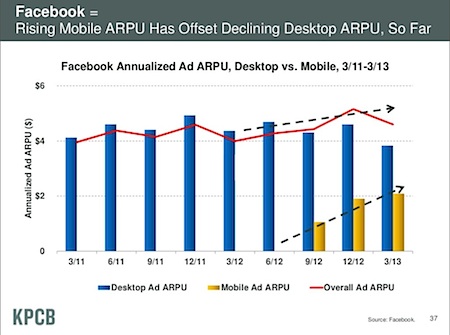 The report highlights not only how the digital transition is accelerating in many major emerging markets, it also shows while the future holds incredible promise for mobile media, opportunities already exist. News organisations must now think about mobile when they think of digital.