How to adapt your Facebook strategy to the new news feed 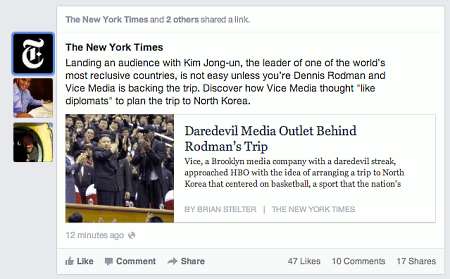 Facebook may be the king of social networks, but it never rests on its laurels or market-leading position. Many social networks have come and gone, and Facebook is constantly tweaking its winning formula and design. It has just announced major changes to its signature news feed, changes that have profound implications for news organisations.

Unlike the changes in 2011, when Facebook launched frictionless sharing, the new changes could help Facebook users find your content, but you’ll need to make a few changes to how you share your content and how your pagePageA document having a specific URL and comprised of a set of associated files. A…

It will take months for the new design to roll out, but if you want to get an early look, you can sign up for the waiting list to switch here. If Facebook is a key element of your social media strategy, it’s definitely worth it.

It is not a secret that Facebook wants to be the main lens through which its users view the world and the world’s media. In announcing the new changes to the news feed, founder, Chairman and CEO Mark Zuckerberg said that he wants Facebook to become a ‘personalised newspaper’. Many of the changes are designed to allow users to quickly filter their news feed, not just by their relationship to people they have friended and followed but also based on the type of content, whether the content includes photos, music or video.

On how Facebook plans to deliver this personalised experience, Craig Kanalley, senior editor for “Big News & Live Events” at The Huffington Post, is very excited with the changes and described many of the new features and how they will allow for greater personalisation:

I have topical feeds, interest lists, of “News,” “Hockey,” “Journalists, “Tech,” and more. I have geo-located feeds too that Facebook auto-created for me like friends in Buffalo (my hometown), friends in New York City (where I live). I can browse all of these sections and discover content posted just moments ago, quickly and easily from the sectional navigation of my “personalized newspaper” at the top right. Tiny gray notification bubbles let me know how many new posts have gone up in a section since I last visited it.

Of course, this will require users to invest a bit more in customising Facebook. However, even if people don’t choose to take full advantage of these settings and topical lists, there are other changes that will have an impact on how the content of news organisations will appear and how prominently it will appear for Facebook users.

What this means for news organisations

The changes actually give news organisations more opportunity to catch the attention of your audience, but you might need to make some changes to your current Facebook strategy.

Multimedia matters – The first big change that you will notice is that pictures and images associated with videos will be bigger. When a user shares one of your stories, a much larger image will appear in the news feeds. The content is now front and centre in the news feed. If you want your stories to stand out, you’ll need to share stories with strong, eye-catching pictures. Social media and tech site Mashable says:

Photos now make up nearly half of all News Feed stories, according to Facebook, up from 30% just a year ago. That growth is likely to accelerate now that Facebook is enlarging the size of photos in the News Feed. Facebook recommends publishers use images with a width of at least 552 pixels.

Facebook is doing this because it is bringing to the desktop a lot of features that it already has on its mobile app, and in mobile, images are increasingly a strong hook for readers as they quickly scan their news feeds with a swipe of their finger.

Focus on encouraging fans to share your content – This has always been important, but with the new changes, it will become even more important. One of the new ways for Facebook users to filter their feeds is “All Friends”. Kanalley from The Huffington Post describes it this way:

The “All Friends” feed is one of the most addicting parts of the new Facebook homepage. It’s real-time, and it’s easily accessible at all times, just one click away in the top right of the screen. It delivers your friends, and only your friends, no sponsored posts, no brands, nothing else.

This means that if you are running a sponsored post campaign, your content might not be reaching as wide an audience as in the past if some users decide to use the “All Friends” view as their default view. However, they will see when their friends share your content. This is why it will be important to think about ways to focus your Facebook efforts on the most shareable content with attractive images and compelling multimedia.

Related content from pages and people (such as celebrities) you’ve liked – Some coverage referred to this as curated posts, but it really is a new class of “story type”, according to Lavrusik. For instance, if you liked a site such as The Huffington Post, you might see a post in your news feed with the most shared stories from the site. If you are a fan of a celebrity, you might see a post with the latest trending news about that celebrity.

Changes merge mobile and desktop design – The changes to the news feed incorporate some of the features already found on the mobile and tablet apps. If your audience uses Facebook primarily on mobile, adapting your strategy will have added importance.

This isn’t the first time that Facebook has looked to become the default filter for news media. In 2011, Zuckerberg announced frictionless sharing and several major media companies, including the Guardian and The Washington Post, launched apps that effectively replicated their sites within the social networkSocial networkAn online destination that gives users a chance to connect with one or more…

However, this update gives news organisations more opportunity to highlight their content rather than get lost in the noise of automatic sharing. It does require you to focus more on the visual elements of your stories, but with the focus on pictures, this might lead more users to clickClickA click can denote several different things. It can be a metric that…

For other summaries of the changes: