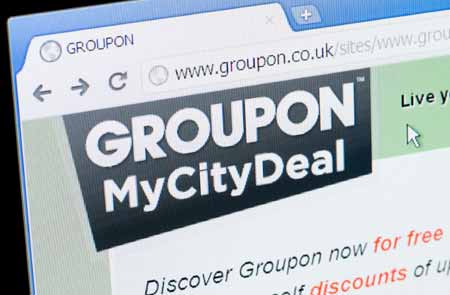 Groupon, the group-buying, daily deals service, is the start-up that has launched thousands of clones around the world, not to mention the largest internet IPO since Google, at least until Facebook debuts on the markets.

For those encouraging news organisations to pursue innovation, they saw Groupon as yet another missed opportunity by news groups to develop a new source of revenue for the digital age.

In 2010 in the early stages of its rapid rise, Tyler Mark, writing for the International Newsmedia Marketing Association, said this of Groupon and newspapers:

“The challenge that this represents to newspapers is bigger than the US$6 billion Groupon is valued at. The point is that in the last two years that newspapers have been struggling through, a dot-com start-up has highlighted an area of extreme danger for newspapers: our capacity and pace of change. Namely, that it’s slow and often too cautious.”

Even before its market float, questions were being asked not only of Groupon but of its entire business model.

Detractors said that the Groupon deals might be a good deal for consumers but weren’t for the businesses, many of them local shops and restaurants, who bought them. People came for the deep discounts but often didn’t come back to the businesses to pay full price.

As for Groupon itself, critics pointed to how easily it was to copy Groupon’s business model, and you only have to look at how many clones were launched in the last few years.

However, with Groupon’s phenomenal growth rate and simple model, companies around the world rushed to cash in.

Literally thousands of competitors copied that model, and that’s just in China. In Russia, dozens, some say hundreds, of daily deal sites sprung up in 2010 during what some have called “Groupon fever”. It’s now estimated that 80% of first time online purchases in Russia are conducted through any of a number of Groupon-style businesses operating there, according to Zina.ru, a group deals aggregator in Russia.

Even smaller markets suddenly found themselves drowning in Groupon clones. From August 2010 to the present, between 120 and 130 Groupon clones launched in Slovakia, according to L’ubomir Jochim, the director of projects for SME daily at publishing company Petit Press.

“Anybody could buy a ready-made solution for about €200 to €500 and could start a groupon portalPortalA Web site that often serves as a starting point for a Web user’s session. It…

Despite the intense competition, Petit Press saw an opportunity to launch its own Groupon portal targeting three lucrative market segments including travel bookings and restaurants, which account for 50% to 60% of the revenue for Groupon-style sites in the Slovak Republic, Jochim said.

However, due to some internal changes at the company, the launch was delayed and by November of last year, it was decided to launch a group deals aggregator, zlavy.sme.sk, rather than another group deals site. Aggregators give consumers a one-stop site to see deals from across the dizzying number of group deals sites that have been launched. For instance, in Asia deal aggregator All Asia Deals allows you to quickly search for deals by type and country. SME benefited by being one of the first deal aggregators to launch in Slovakia.

Group deals aggregators have many business models, Jochim said, adding that some generate 80% of their revenue from clicks or impressions and others make 80% of their income from commissions on the deals.

Petit Press used its daily newspaper SME and its news portal SME.sk, the third most visited site in Slovakia, to promote the deals aggregator. They focused most of their efforts initially on online brand campaigns because their experience is that print campaigns for online projects aren’t effective, Jochim said.

After the launch, they shifted from brand advertising to product campaigns, using special widgets on SME.sk to promote deals. The combination of self-promotion on zlavy.sme.sk and offers from daily deal portals have been really successful, Jochim said. They have seen double the click-throughClick-throughThe measurement of a user clicking on a link that re-directs the user’s…

Success depends on the situation in the market, the chosen model of the front-end of the aggregator and market position of the aggregator with respect to its competitors, he added. “I’m sure that our profit from the aggregator is much higher than the profit of any top Groupon portal in Slovakia.”

However, it should be noted that aggregators work best at a national rather than local level, so it might not be a solution for local publishers.

The future of the group deals business

The Groupon model has some problems that must be solved, Jochim said, and any company thinking of entering the market must be aware of them:

To address these issues, group buying sites are in the process of creating an international marketing association, the Global Daily Deal Association, which has created a code of conduct and a seal of approval that the association hopes will give customers confidence in the services.

Due to the rush of groupon clones in Slovakia, Russia and elsewhere, we’re already seeing consolidation. Already, Jochim estimates that only about half of the 120 or 130 Groupon portals launched since late 2010 are still in operation in Slovakia.

Many of these smaller sites aren’t simply shutting down but are being acquired by bigger players either in the country or region they serve. In the Baltics, Cherry Media recently acquired Latvia’s CityLife, which now gives it 50% or more of the group deals market in Estonia, Latvia and Lithuania. In Russia, leading group deals site Biglion bought Belorussian site Bongo.by.

In most markets the time for launching new standalone deal portals has probably passed. Jochim now sees very little chance for new daily deals businesses to be successful in markets like his. Competition is intense due to Groupon fever, and start-up costs are high due to marketing and sales expenses.

However, the group deals aggregator might be a revenue-generating alternative, and the model is positioned to weather consolidation in the sector well. Jochim says that the deal aggregator has been one of the most successful internet projects Petit Press has launched in recent years. The aggregator launch has been so successful that the company is considering other types of discount-driven businesses outside of the Groupon portal model.